Messageboard is back up, please join other moms on the messageboard. 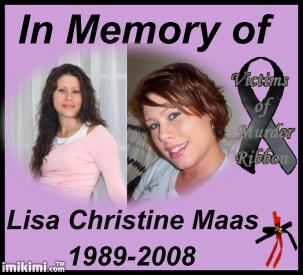 According to the docket sheet Nicky's killer was found guilty on all charges and sentenced to life without parole....Thank you jurors for doing the job and giving justice to the Pisano family....Laura/AV

So glad to hear this and so very glad the waiting is over for you Barb. Can't believe how quick they are sentenced there wish it was that quick here I had to wait three agonizing months. But then again you had to wait over 3 agonizing years for trial for me it was all over and done in 10 months.
Love and Hugs
Jim's mom

Thank you Jesus and my fellow MOMS.Not only was he found guilty of 2nd degree murder which holds a life sentence without the chance of parole they gave him a double life sentence for the consiracy part and then even more years for the burglary and carrying charge.My son Vinny was very gracious when he read his impact statement he told him how it was. He was sorry for his mom and family for their grief but that he would pray for them as well as Joseph Harville and that maybe he could teach kids (from prison) how to not go down the path that he did.He also told the family that he watched his mother cry,now it is her turn to cry.She screamed unbelievably in court and then ran out.After all was said and done and they were downstairs and down the street from us the aunt ran screaming past us for a rescue they must have called,she chased a rescue like 2 blocks,it was the wrong one I guess and then an officer helped her flag a private one,next thing you know there was 2 there.I couldn't look so my husband went on the other side of the street and saw that none of our family was affected so he came back.My daughter in law knew one of the clerks that worked there who called her and told her the mother had a stroke and was motionless on the sidewalk and then the aunt passed out right after taht and they took her to the hospital as well This was sad for me,but I wanted justice for Nicky.The mother said she was sorry for our family but they got the wrong person.2 eyewitness's I don't think so.This was before her alleged stroke,when she ran out of the courtroom.We waited till her family left before we went outside,cause we were always bumping into them.Joseph Harville never said he was sorry,no remorse,even after my son said he would pray for him.The other one Robert Gray who pleaded guilty to 3rd degree murder will be sentenced Oct 5th.He recanted everything he was going to say and then said Joseph Harville wasn't the shooter,because he was looking at his best friend in the courtroom,so all deals are off for him I believe,because he lied.We'll wait and see cause he pergured himself in front of the judge.Now they go after the uncle which has been roaming for 3yrs and 3 months free.Can't wait he's the scum bag that planned the whole thing and jeoprodized his own nephew.Well ladies justice has come and it feels sweet.I love you Nicky,love you MOMS

Barb, I am so happy that things turned out the way they should, after your long wait. Maybe now you can rest a little easier without having the trial to go through. I am glad that part is over for you. Love ya, Darien

those are the words we want to hear...I'm glad you are done with this part now.
sending you love

I'm glad this part is over for your Barb and your family and justice has been served. I hope the guy who recanted gets the same life without parole and more on top for lying. They always recant their stories most because they are scared. Just remember God don't like ugly. (((hugs)))

im very happy for you and the outcome of the case. I hope everyone involved gets the same penalty. Hugs go out to you and your family.

Dear MOMS
Thank you all so much for your support.No one really wins in these situations and like others have said it won't bring Nicky back,but there is some closure if even in the fact that these killers can't make another family go through what we have all been through.Love you's all very much.My husband Paul just walks around the house smiling and saying not one but 2 life sentences.God is good and yes Betty God don't like ugly.XXXXXXOOOO.Love and God Bless

I am so happy for you and your family. What a relief it is to know that there is justice. Hugs to you.

« back
Return to Website  > Index
Free Forum&nbsppowered by Bravenet